The Officer Basin geology and hydrocarbon potential is analogous to basins in Oman and Siberia with massive multi-billion barrel oil reserves. A deep seismic survey was recently conducted by Geosciences Australia & Geosciences Western Australia. The survey has revealed a different architecture in the Western Officer Basin than previously interpreted from exploration wells drilled in the region. Until now, the western Officer had been divided into four structural zones, beginning with a wide, shallow platform in the west, a thrust fault zone, a zone where salt diapers and related features and an over-thrusted zone in the east at the boundary with the Musgrave province. The new findings suggest the western end is shallow but not a platform, and the eastern boundary is defined by an extensional fault, not a thrust fault. Perhaps most significantly for oil explorers is that salt diapirs occur much further west than previously believed and are responsible for disruptions to the stratigraphy that were previously interpreted as the thrust fault zone. This means that salt-related petroleum traps extend over a much larger proportion of the areas than previously suspected.  Numerous shows found in the regional wells drilled show evidence of a working petroleum system. There is also strong evidence of massively thick reservoir sections with good porosity and seal pairing. When combined with the sheer size of some of the indicated traps it is reasonable to conceive that the Officer Basin could be harboring overlooked giant and super giant oil accumulations. 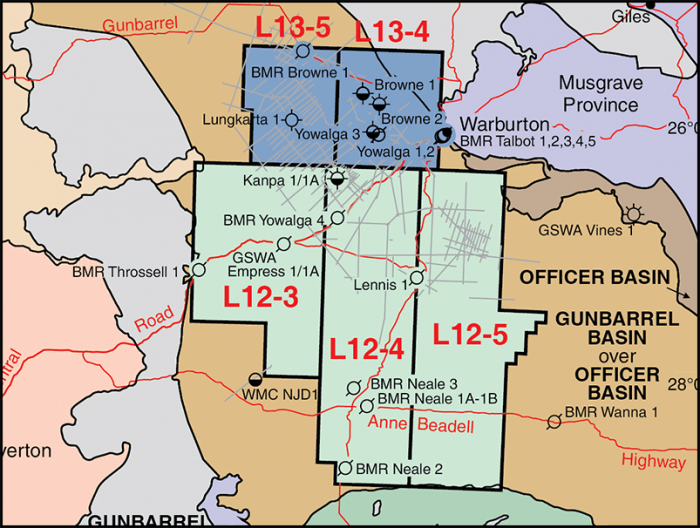 License L12-5 (STP-EPA-0076) was pledged to Liberty by the government of Western Australia in 2013. This giant block is situated in the Officer Basin of Western Australia and is comprised of approximately 5.6 million acres. It is currently under native title negotiation and technical review. Liberty has negotiated options over four other large blocks comprised of approximately 14.4 million acres that are all contiguous to the Liberty block and are also available for farm-in.